Welcome to the Bell Tower at Hadleigh

Dating from the 13th century the tower is the oldest part of the church. It currently houses eight bells which are rung to the glory of God every Sunday.

Last re-hung and re-tuned in the 1970s the bells of St Mary's Hadleigh are perhaps the best sounding eight in the county. Our oldest bell, the fourth founded by John Kebyll dates from around 1480 and the youngest, the sixth was cast in 1856. (See panel)

Without a commited band of ringers our bells would be silent.  We have a regular band for Sunday Services and a regular practice on Wednesday evenings. We also ring for weddings, civic and special services and of course at Christmas and new year. 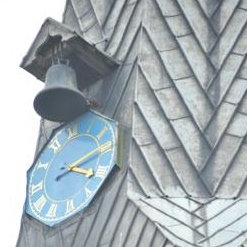 The Clock bell hangs outside the tower and dates from around 1280. One of the oldest bells in East Anglia, it has cast into it AVE MARIA GRACIA PLENA DOMINUS TECUM which translates to Holy Mary filled with grace the Lord be with you. The lettering has been cast the wrong way round.

Dating from 1715 and holding 16 quarts (Approx 18.2Lts) the Bell Ringers gotch bears the names of eight ringers and also the following rhyme:

"If you love me due not lend me,
Euse me ofton and keep me clenly,
Fill me full or not at all,
If it be strong and not with small."

Now usually displayed at the rear of the church, the Gotch has resided elsewhere. Below is an extract from a newspaper cutting from around the 1850s.  “The ringers of Hadleigh have in their possession a curious jug of earthenware, which is kept by the landlord of the Eight Bells Inn, and is bought out on occasions of local weddings among the upper classes.  At Every Christmas too it is filled with strong liquor by mine host of the Eight Bells, at the ringers annual frolic, when every stranger who goes into the room is forced to pay a fine towards replenishing it as it passes around the company.”

From the same newspaper cutting is the following:

“Hadleigh is one of the parishes in which the custom of ringing the curfew bell still survives. The tenor bell is rung at eight o'clock every evening from the Sunday following 10th October to the Sunday nearest to 10th March. During the same period the bell is also rung at five o'clock every morning.”>

What's bell ringing all about?

Bell ringing is a team activity that stimulates the brain and helps keep you fit. Many consider ringing to be their contribution to church life, others do it for the pure pleasure and the company it brings. Ringers come from all walks of life and range in age from ten to those in their eighties.

"When I'm ringing I forget all the tensions and frustrations of the day. Even better: I couldn't wish for a nicer group of friends!"

Could I become a ringer?

Ringing is well within the capabilities of most people. The initial learning takes severalweeks, after which you can begin to ring with the rest of the band. Most ringers practiseonce or twice a week and ring before church on Sunday.

"Being able to count is all the maths you'll need and you can become a very good ringer without knowing anything about music."

Why learn to ring?

Beware! once you've got the bug, you'll find it hard to give up:

"I learnt to ring over forty years ago and I still get the same buzz that I did when I first started."

The origins of change ringing lie in the sixteenth century when church bells began to be fitted with a full wheel. This gave ringers control of their bell, allowing sets of bells (rings) to be rung in continuously changing patterns.

Music is created by altering the order in which the bells sound. This is done in defined sequences of changes called methods. Learning a few simple methods allows ringers to join in with other bands in towers around the world.

"One of the delights of ringing is the endless opportunity to learn new things."

Want to know more? This email address is being protected from spambots. You need JavaScript enabled to view it.