The Hadleigh Rector who suffered Martyrdom

Dr. Rowland Taylor L.L.D. was a very able scholar, and a fine preacher. He was appointed to Hadleigh in 1544 by Archbishop Thomas Cranmer, Taylor had been his chaplain, and previously chaplain to Hugh Latimer, the Bishop of Worcester.

Taylor was a supporter of the new Protestant reformed religion brought in by Henry VIII in 1534. It was in 1553, with the accession of the Catholic queen, Mary Tudor, that the counter reformation was brought in, but with which Taylor did not agree. Rowland Taylor soon fell foul of the ecclesiastical authorities, following a confrontation in St. Mary’s Church with the Catholic priest of nearby Aldham.

Following a trial in London Taylor before Bishop Stephen Gardiner, he was condemned to death on 30th January 1555, only 10 days after Parliament had revived the old statute for the burning of heretics. Taylor was brought back to Hadleigh, taken up George Street and thence to Aldham Common where the sentence was carried out by burning, on 9th February 1555. He was to be the first of Queen Mary’s martyrs. Taylors curate here at Hadleigh, Richard Yeomans, was to suffer the same fate at Norwich in 1558.

An unhewn stone was later placed on the site of the martyrdom on Aldham Common which stated, ‘1555 D Taylor in defending that was good at this plas left his blode.’ A further larger stone monument was set up in 1818.

Both stones can be seen just off the A1071 Hadleigh By-pass at the top of Lady Lane.

Mark this rude stone where Taylor dauntlefs stood,
Where Zeal infuriate drank the Martyrs blood
Hadleigh! That day how many a tearful eye
Saw thy lov’d Pastor dragg’d a Victim by;
Still scattering gifts and blefsings as He past.
Te the Blind Pair “his farewell alms were cast:
His clinging Flock e’en here around him pray’d
As thou hast aided us. Be God thine Aid”.
Nor taunts, nor bribe of mitred rank nor stake.
Nor blows, nor flames his heart of firmnefs shake
Serene   his folded hands his upward eyes
Like holy Stephen’s seek the opening skies:
There fix’d in rapture, his prophetic sight
Views Truth dawn clear on England’s Bigot night:
Triumphant Saint! He bow’d and kifse’d the red.
And soar’d on Seraph wing to meet his God.

The Marian martyr Rowland Taylor (1510–55) who was rector at the time of his death, when martyred on Aldham Common, is commemorated in the south east window in the St John’s Chapel, St Mary's Church Hadleigh. 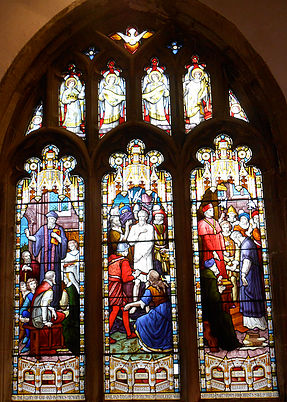